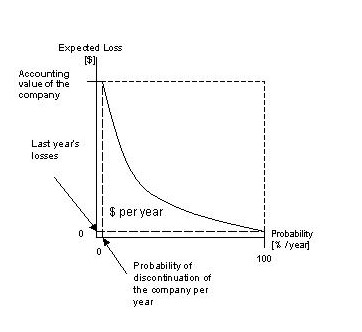 Risk assessment may be the most important step in the risk management process, and may also be the most difficult and prone to error. Once risks have been identified and assessed, the steps to properly deal with them are much more programmatical.

Part of the difficulty of risk management is that measurement of both of the quantities in which risk assessment is concerned can be very difficult itself. Uncertainty in the measurement is often large in both cases. Also, risk management would be simpler if a single metric could embody all of the information in the measurement. However, since two quantities are being measured, this is not possible. A risk with a large potential loss and a low probability of occurring must be treated differently than one with a low potential loss but a high likelihood of occurring. In theory both are of nearly equal priority in dealing with first, but in practice it can be very difficult to manage when faced with the scarcity of resources, especially time, in which to conduct the risk management process. Expressed mathematically,

Financial decisions, such as insurance, often express loss terms in dollars. When risk assessment is used for public health or environmental decisions, there are differences of opinions as to whether the loss can be quantified in a common metric such as dollar values or some numerical measure of quality of life. Often for public health and environmental decisions, the loss term is simply a verbal description of the outcome, such as increased cancer incidence or incidence of birth defects. In that case, the "risk" is expressed as:

In the context of public health, risk assessment is the process of quantifying the probability of a harmful effect to individuals or populations from certain human activities. In most countries, the use of specific chemicals, or the operations of specific facilities (e.g. power plants, manufacturing plants) is not allowed unless it can be shown that they do not increase the risk of death or illness above a specific threshold. For example, the American Food and Drug Administration (FDA) required in 1973 that cancer-causing compounds must not be present in meat at concentrations that would cause a cancer risk greater than 1 in a million lifetimes.

How the risk is determined

In the estimation of the risks, three or more steps are involved, requiring the inputs of different disciplines.

The first step, Hazard Identification, aims to determine the qualitative nature of the potential adverse consequences of the contaminant (chemical, radiation, noise, etc.) and the strength of the evidence it can have that effect. This is done, for chemical hazards, by drawing from the results of the sciences of toxicology and epidemiology. For other kinds of hazard, engineering or other disciplines are involved.

The second step for chemical risk assessment is determining the relationship between dose and the probability or the incidence of effect. The complexity of this step in many contexts derives mainly from the need to extrapolate results from experimental animals (e.g. mouse, rat) to humans, and/or from high to lower doses. In addition, the differences between individuals due to genetics or other factors mean that the hazard may be higher for particular groups, called susceptible populations. An alternative to dose-response estimation is to determine an effect unlikely to yield observable effects. In developing such a dose, to account for the largely unknown effects of animal to human extrapolations, increased variability in humans, or missing data, a prudent approach is often adopted by including safety factors in the estimate of the "safe" dose, typically a factor of 10 for each unknown step.

The third step, Exposure Quantification, aims to determine the amount of a contaminant (dose) that individuals and populations will receive. This is done by examining the results of the discipline of exposure assessment. As different location, lifestyles and other factors likely influence the amount of contaminant that is received, a range or distribution of possible values is generated in this step. Particular care is taken to determine the exposure of the susceptible population(s).

The results of the three steps above are then combined to produce an estimate of risk. Because of the different susceptibilities and exposures, this risk will vary within a population. The decisions based on the application of risk assessment are sometimes based on a standard of protecting those most at risk. This problem raises the question of how small a segment of a population must be protected. What if a risk is very low for everyone but 0.1% of the population? A difference exists whether this 0.1% is represented by

If the risk is higher for a particular sub-population because of abnormal exposure rather than susceptibility, there is a potential to consider strategies to further reduce the exposure of that subgroup. If an identifiable sub-population is more susceptible due to inherent genetic or other factors, there is a policy choice whether to set policies for protecting the general population that are protective of such groups (as is currently done for children when data exists, or is done under the Clean Air Act for populations such as asthmatics) or whether if the group is too small, or the costs to high. Sometimes, a suitable position is to at least limit the risk of the more susceptible to some risk level above which it seems too inequitable to leave them out of the risk protection.

The idea of not increasing lifetime risk by more than one in a million has become common place in public health discourse and policy. How consensus settled on this particular figure is unclear. In some respects, this figure has the characteristics of a mythical number. In another sense, the figure provides a numerical basis for what to consider a negligible increase in risk. In part, the one in a million benchmark arose early in public health risk assessment history when risk assessment was a tempering analysis to existing statutory language such as the Delaney Clause prohibition on any use of introduced carcinogens or where environmental statutues were using a "best technology" decision rule. Some current environmental decisionmaking allows some discretion to deem individual risks potentially "acceptable" if below one in ten thousand increased lifetime risk. Low risk criteria such as these do provide some protection for the case that individuals may be exposed to multiple chemicals (whether pollutants or food additives, or other chemicals). But both of these benchmarks are clearly small relative to the typical one in four lifetime risk of death by cancer (due to all causes combined) in developed countries.

Individuals may be tempted to advocate the adoption of a zero-risk policy. After all the 1 in a million policy would still cause the death of hundreds or thousands, of people in a large enough population. In practice however, a true zero-risk is possible only with the suppression of the risk-causing activity. More stringent requirements, or even the 1 in a million one, may not be technologically feasible at a given time, or so expensive as to render the risk-causing activity unsustainable.

In the interest of public health, the risks vs. benefits of the possible alternatives must be carefully considered. For example, it might well be that the emissions from hospital incinerators result in a certain number of deaths per year. However, this risk must be balanced against the available alternatives. In some unusual cases, there are significant public health risks, as well as economic costs, associated with all options. For example, there are risks associated with no incineration (with the potential risk for spread of infectious diseases) or even no hospitals. But, often further investigation identifies further options, such as separating noninfectious from infectious wastes, or air pollution controls on a medical incinerator, that provide a broad range of options of acceptable risk - though with varying practical implications and varying economic costs. Intelligent thought about a reasonably full set of options is essential. Thus, it is not unusual for there to be an interative process between analysis, consideration of options, and then further analysis.